For six characters tossed in the wake of the 2008 recession, the hubris of the American dream has crafted a thrilling and darkly funny ride to rival the Greek tragedies. Struggling single mother Crystal is learning what lies beneath the scratched veneer of middle class civility.

WARNING: This production contains strong language, brief violence, and implied sexual behavior and is not suitable for children.

In a world of magic and fantasy, an evil minister plots to overthrow the king and steal his bride. Playwright Carlo Gozzi fills this classic Italian comedy with spells, romance, deceit, twists and turns to create a play unlike any other.

A fiery class war erupts in 1950’s Baltimore when high society teenager Allison falls for Wade “Cry-Baby” Walker–a juvenile delinquent from the wrong side of the tracks–in this delightfully demented rock musical based on John Waters’ cult classic film.

In 1955 and a freak snowstorm has closed the highway just west of Kansas City, and a cozy diner next to the bus depot provides refuge, or a means to escape, for the stranded travelers. The sheriff tries to keep order until the road clears, but the natives are restless as love is lost and won in William Inge’s classic comedy of romance and heartache. 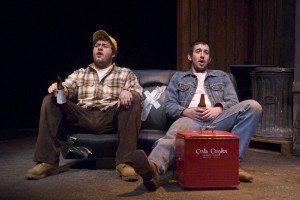 The box office is located on the ground level of Eldred Hall, 2070 Adelbert Road. The box office is open during the week until 5pm, and one hour before curtain on all performance days. You can reserve your tickets online, or pay at the door.

Reservations may also be placed on voice mail.

FREE parking is available for theater patrons in the following locations:

THE VIC LOT (Visitor Information Center) is located off Euclid Avenue directly across from where East Blvd. intersects with Euclid Ave. by Severance Hall. The lot is between Amasa Stone Chapel and Crawford Hall and an Information booth is visible as driver enters the lot. Drive vehicle straight ahead between two open gates and park in any available space. The lot is in close proximity to the campus quad. Eldred Theater is straight ahead to the left and can be identified by smoky black windows on the ground level.

LOT 13 off Adelbert Road is located opposite the entrance to Lakeside Hospital and in front of Millis Science Center. Limited free parking is available one-hour before show time and spaces are reserved primarily for physically challenged patrons on a first-come, first-serve basis.